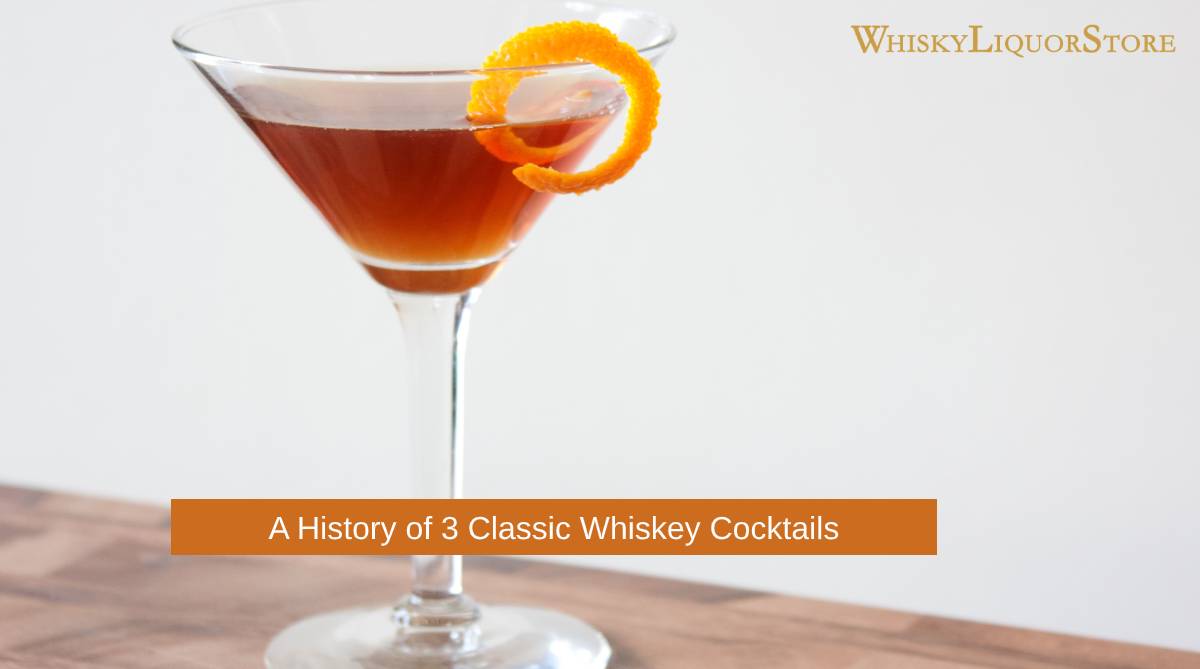 If you’re a big fan of whiskey and its variants (like rye and bourbon), you’re probably already familiar with at least some of the most classic and well-loved cocktails that feature these spirits at the front and center. But did you know they almost all have a unique history and past that helped them reach the level of popularity they enjoy today? In this article, you’ll learn about the histories of some of the most widely recognized whiskey-based cocktails, as well as some quick and easy directions for how to make each one. Check out the information below if you’ve ever wanted to learn more about where some of your favorites come from.

The Old Fashioned cocktail can be dated back to 1862 when a cocktail recipe book listed how to make a drink called the “Old Fashioned Holland Gin Cocktail.” However, this drink wasn’t made with whiskey until 1880, when a social club in Louisville, Kentucky created the drink as it’s known today. The cocktail was taken to the Waldorf-Astoria’s bar and from there quickly gained popularity.

The recipe as it is still prepared today was first published in a recipe book in 1895. According to writings from the early 19th century, however, the drink was prepared partially and the customer was handed the whole bottle of bourbon in order to finish it off as he saw fit—which is quite a lot different from the bartending method used today! Otherwise, the Old Fashioned is still made with a muddled sugar cube and rye, although there are some variants that have cropped up over the years, too.

Other than these variants and twists on the traditional, the Old Fashioned hasn’t changed much since its original creation. Ever since bartenders chose to add whiskey to the recipe for a cocktail originally prepared with gin, the Old Fashioned has been the same unwavering favorite. This is a very classic drink that’s been around for centuries and continues to be one of the most highly requested whiskey-based cocktails around.

How-to:
• Chill a rocks glass.
• Place a sugar cube into the bottom of the rocks glass along with one bar spoon of water. Muddle the sugar cube in the water.
• Add 2 ounces of rye whiskey or bourbon and stir.
• Add a large ice cube and stir for about 30 seconds.
• Garnish with an orange twist and serve immediately.

According to the most popular version of the lore, Manhattan was supposedly originally created by Dr. Iain Marshall in New York City. This was said to have occurred in the 1870s at a banquet that becomes widely known among social circles in the area and is often touted as the origin of the Manhattan cocktail. However, there are a handful of reasons why this story may not be entirely true, and there are other cocktails from earlier times that seem to be made in the same way as Manhattan. As such, the true origin is a little bit of a mystery.
For example, another story states that, in the 1860s, a Broadway bartender created the drink and labeled it the Manhattan too. This drink was made with whiskey, vermouth, and bitters, much like the cocktail still is today.

Although it’s hard to say for sure where the Manhattan came from, it grew in popularity during the latter half of the 1800s, particularly in New York City. Some variants came about, including a version that used absinthe along with the other ingredients; during Prohibition, Canadian whiskey was used in place of rye whiskey, since it was easier to come by.

• Chill a cocktail glass.
• In a mixing glass, combine 2 ounces of rye whiskey with ½ ounce of sweet vermouth and 1 dash of bitters.
• Add the ice and stir well until the drink is chilled through.
• Strain the drink into the prepared cocktail glass.
• Garnish with a maraschino cherry and serve immediately.

Like many cocktails that date back over a century, it’s hard to pinpoint the origin of the whiskey sour. This cocktail is becoming popular once again, however, so more and more people have grown interested in learning where it could’ve come from, even if there’s no set answer.

This is a recipe that was common knowledge for decades—and maybe even centuries—before it was ever written down. Although the first written record of the whiskey sour occurred in an 1862 bartending guide, its simple and efficient punch-like measurements were already well-known and recognized. In fact, the whiskey sour can probably be dated as far back as sailors and pirates who combined liquor with citrus in order to have a safe drinking option and try to prevent scurvy at the same time.

Some variants of the whiskey sour add an egg white or even a whole egg. However, this is not a whiskey sour in the true, traditional sense, and is sometimes referred to as a Boston sour instead. The egg was added to make the drink somewhat easier to sip as well as nicer to look at, and it caught on overtime. The recent trend back toward enjoying whiskey sours, however, often excludes the egg.

• Add 2 ounces of bourbon or rye whiskey to a cocktail shaker along with ¾ ounce of fresh lemon juice and ¾ ounce of simple syrup.
• Shake to combine.
• Add ice to the shaker and shake again to chill.
• Strain over additional ice into a rocks glass.
• Garnish with orange wheels and brandied cherries, and serve on the rocks immediately.

Now that you know where these classic cocktails come from, you can try your hand at making them on your own. And if you’re already an old pro at preparing and mixing these favorites, why not make around for yourself and your friends or family next time you have a chance? You may even be able to entertain your guests with a few extra pieces of trivia about the history and legacy of these important alcoholic mainstays.