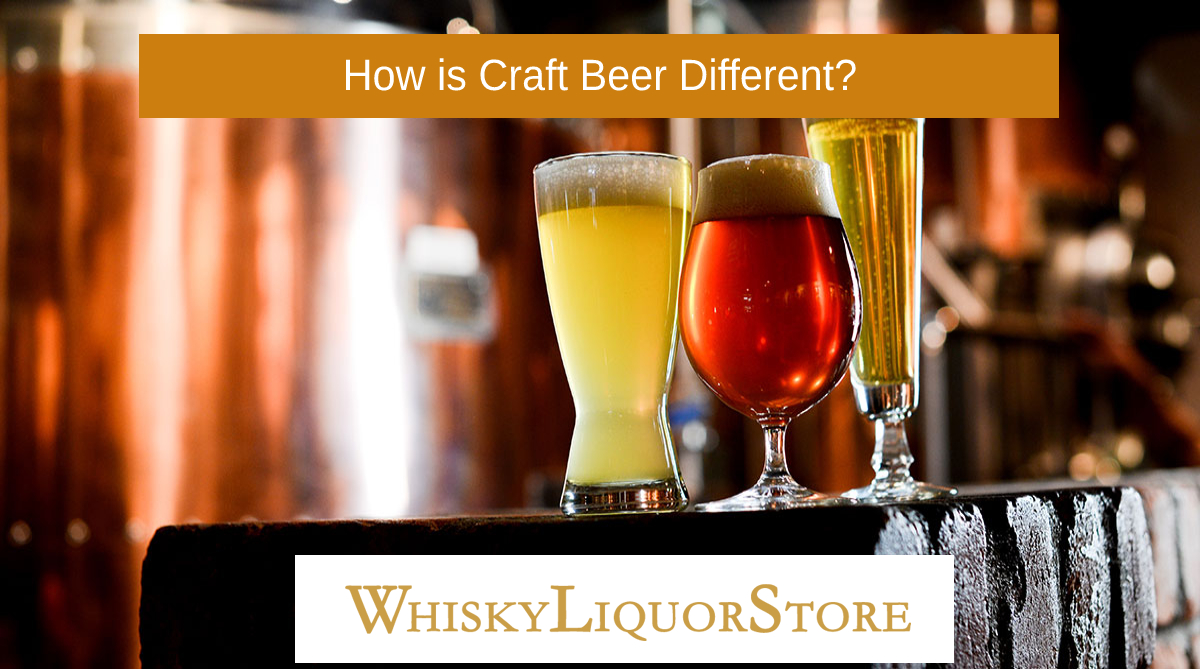 Have you ever wondered just what constitutes “craft beer?” Do you find yourself wondering what makes this beer so special when you see it on menus or in the store? Would you like to know more about what to expect if you try making the change from regular beer to craft beer?

A lot of times, when someone tries craft beer for the first time, they don’t have the right expectations. There’s nothing wrong with expecting a lot from your craft beer, but it’s important to understand just what this beer is—and what it isn’t.

In this article, we’ll introduce you to craft beer and help you learn more about the similarities and differences between it and other types of regular beer. By the time you finish reading, you should be ready to choose your favorite craft beer and give it a try right away.

The production methods and steps involved in brewing beer differ greatly between craft beer microbreweries and large-scale beer production companies. Many of these bigger-scale companies cut corners (and costs) by using rice or corn instead of hops, which changes the flavor and body of the beer drastically. Although this type of beer will still achieve its ultimate goal, it will do so with a lot less flavor and a much lower production value than a craft beer might. As an added bonus, many microbreweries are more concerned about the environment and making green decisions in their production than large-scale companies are, making them a better choice all the way around.

If you want to choose a beer based on its appearance and how it will look in a glass, then by all means, choose a craft beer. Don’t go with mass-produced beer in this situation, or you’re just going to be disappointed. Most beer that comes from a large-scale production company tends to look watery and pale in color, which is unappetizing at best. It often has a head when poured into the glass, but the head quickly disappears, leaving behind simply yellowy, watery beer that doesn’t entice anyone to drink it. Craft beers, on the other hand, come in a variety of colors and styles and are a lot more likely to look appetizing in a glass. Those that are designed to have a head won’t lose the head for a long time, and the color remains rich throughout these beers too.

Flavor is really where craft beer truly shine. A mass-produced beer is probably going to taste a lot like any other mass-produced beer, with maybe a few small changes between brands and labels. These beers are usually lacking in taste and meant to be served ice cold, mostly to help cover up this lack of flavor. However, craft beers are better served slightly chilled but not ice cold, therefore allowing you to enjoy the full flavor profile in every sip. Microbreweries are always trying to improve the taste of their beer varieties and constantly working to offer their customers the best new experiences possible. Some beers may be developed with a particular flavor profile or theme in mind, and these often are rich and rewarding experiences with every glass.

Craft beer is never going to taste exactly like a craft beer from another brewery. Although certain styles will taste similar across the board, there will always be some differences that separate a specific microbrewery’s flavors from its neighbor’s. This lends a lot of variety to the world of craft beer and provides a new and unique experience every time you drink a drink from a different company or label. On the other hand, there isn’t much variety between mass-produced beers; they may sometimes offer different flavors (like lime, for example), but they don’t focus much on making unique and interesting variations for customers to choose from. And of course, a beer from one major company is probably going to taste a lot like the same style of beer from another major company, too.

The quality of ingredients used in the production of craft beer is simply higher than it is in mass-produced beers. There are four ingredients required to brew beer: water, yeast, malt, and hops. The attention to detail in these ingredients makes a huge difference in the taste and quality of the beer you can get from a craft beer brewery. Here are some more features to keep in mind:

• Water quality: Large-scale companies aren’t going to worry much about picking the right water for their brewing. Microbreweries, however, pay attention to what may be present in the water they use, and they make their brewing decisions based largely on the type of water available in their location.

• Yeast: The type of yeast changes the final outcome of the beer. Microbreweries focus on picking the right yeast for the job every time and tweaking and changing the batch of beer based on its yeast as often as necessary.

• Malt: Small batches made by microbreweries can utilize a variety of specially-chosen malts to create the perfect flavor every time. This part of the production process includes a lot of creativity from the brewer, and different malts may be chosen at different times of the year or for different batches to create entirely new flavor profiles in a specific style of beer.

• Hops: Craft beer is heavily focused on hops—whether the beer actually has much hop flavor in the end or not. Many of the most popular types of craft beer are very hop-forward, and this bitterness is used to balance out the other (often sweet) flavors present in craft beers.

So what do you think? Did you learn a little something about craft beers? Sometimes, people who are just getting started drinking and enjoying craft beer may not realize just what it is, or what it means to have a craft beer instead of a regular beer. For this reason, it’s important to arm yourself with a little bit of beer knowledge to help you out along the way.