If you’re a lover of whiskey or just like to brush up on cocktail and alcohol lore, you may be wondering just where this popular drink came from. And if you’re really enthusiastic about your favorite portable, you may also be curious about how it’s made. Below, we’ve put together a concise but thorough rundown of the history of scotch whiskey as well as the process by which it is created. Read through this information to give yourself a better understanding of whiskey, and you may be surprised at what a difference it makes in helping you enjoy it, too.

The history of Scotch whiskey dates back as far as the history of the distillation process, which can be traced officially to 1494. However, the recorded information available about distillation at that time heavily implies that this process was already very common, so it really goes back even further. Unfortunately, we don’t have the records to help determine just when distillation was first discovered, but we know that this is where the concept of Scotch whiskey came from all those centuries ago. 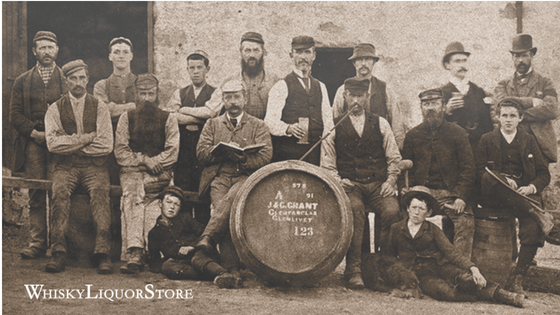 Over time, distillation capabilities improved, lead largely by monks who had perfected the art. Whiskey, at the time, was often used to help relieve symptoms associated with smallpox as well as other common ailments, and it wasn’t yet often used for pleasure purposes. However, as time passed and distillation faced taxation and prohibition throughout the years, the drink started to gain more popularity and notoriety. This had a lot to do with Scottish distillers, who were forced to make alcohol in secret because of the laws at the time. This alcohol was often smuggled throughout the country and across national boundary lines too, which helped spread its popularity and usage even more.

Once distillation was finally legalized and sanctioned in Scotland, the smugglers no longer had a market and eventually quit moving alcohol. To this day, however, many distilleries are still located on the same sites as the ones that belonged to the smugglers of days gone by. For a while, Scotch whiskey was not found very commonly anymore, although grain whiskey did take its place for some time. This was a lighter variation of the traditional Scotch whiskey and was more widely received by those who found the traditional version less appealing.

In the latter part of the 1800s, a pest beetle destroyed many vineyards in France and caused the production of wine and brandy to drop significantly. It was almost impossible to find any wine still being made at this time, and a few years after the infestation, whiskey took over and became widely used. It became considerably more popular than brandy and remained this way even after the wine industry started to bounce back from its unforeseen disaster.

After that time, Scotch whiskey became popular worldwide. It caught on and continues to be a classic that has many fans. There are several different variations of Scotch whiskey out there, and there’s one for just about every taste. The distillation process for whiskey hasn’t really changed over the centuries, but the way it’s enjoyed has, and there are always new and exciting uses for this popular drink cropping up here and there too. It is sure to stick around for centuries more to come.

There is an intricate process of the creation of Scotch whiskey, and many consider it an art form. Although we are no longer sure exactly how it was made centuries ago when it first came into being, the current process hasn’t changed much over the years other than to streamline it in some ways. Therefore, many agree that Scotch whiskey is still produced in more or less the same way it always has been, aside from some modern upgrades here and there. In this section, we’ll walk you through the unique and intriguing process of the creation of Scotch whiskey.