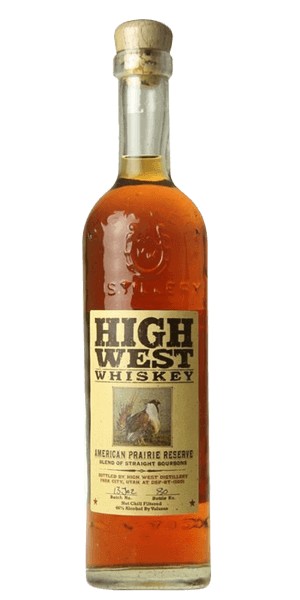 September is Bourbon Heritage Month. Celebrate with the spirit that helps conserve the West. For each bottle of American Prairie Bourbon™ sold, High West donates 10% of its after-tax profits to the American Prairie Reserve. Learn More at www. americanprairie. org American Prairie Bourbon™ is a complex blend of straight bourbons producing an aromatic whiskey that helps preserve the West. How to Enjoy: Great in cocktails, but has the complexity to stand on its own. The Name: High West is dedicated to preserving and promoting the American West. American Prairie is a superb premium bourbon whiskey dedicated to one of the greatest land preservation projects of our time. The American Prairie Reserve in Montana is a 5000 Square mile land tract the size of Connecticut restored to what Lewis and Clark would have seen. High West will donate 10% of after tax profits from each bottle to the American Prairie Foundation. Back Label Story: High West Distillery is passionate about the American West’s natural beauty. That’s why we want to raise awareness of one of the most fantastic projects of our time: the American Prairie Reserve in northeastern Montana. This is an amazing effort to assemble the largest wildlife reserve in the lower 48 states. When stepping onto the plains of American Prairie Reserve, it’s easy to imagine the landscape as Lewis and Clark and Native Americans saw it, with thundering herds of bison, racing bands of pronghorn antelope and prairie dog towns dotting the horizon. When complete, the Reserve will be approximately 5,000 square miles; larger than Yellowstone, Yosemite, and Grand Teton National Parks combined. Go to americanprairie. org to learn how to visit and support this worthy cause. Capable of running at speeds up to 55 miles per hour, the pronghorn Antelope is North America’s fastest land mammal and performs the continent’s second longest land migration of more than 500 miles. Because of their love of travel, pronghorn require large areas of open and intact grasslands. Moreover, pronghorn populations have decreased 98% since the 1800’s due to habitat destruction. American Prairie Reserve helps pronghorn through its ongoing fence removal efforts and by conserving wildlife corridors. Our American Prairie is a carefully crafted blend of straight bourbons at least 2 years old, (sourced whiskeys, see highwest. com for details) making a great sipper and thoughtful person’s whiskey. High West pledges to donate 10% of our after tax profits from the sale of this bottle to the American Prairie Reserve. Be thoughtful and help us protect and preserve America’s natural resources. Montana artist Diane Whitehead painted the handsome Pronghorn on the front of this bottle. You can see more of Diane's art at www. dianewhitehead. com Technical Details Ratio of whiskeys: top secret! Filtration: not chill-filtered or carbon treated. TTB Designation: A Blend of Straight Bourbons Proof & ABV ABV: 46% 92 Proof Age(s), Distilled by & Mashbill(s): A blend of straight bourbon whiskeys aged from 2 to 13 years Straight Bourbon Whiskey: 75% corn, 21% rye, 4% barley malt from MGP; 84% corn, 8% rye, 8% malted barley from undisclosed source; Other whiskey components are undisclosed due to contractual reasons. Barrel Type(s): New, charred, white American Oak Sensory Notes Nose: Light caramel and sweet vanilla Taste: Rich and earthy on the palate with well balanced flavors of candy corn, honey nougat and sweet corn bread biscuits Finish: Vanilla with a hint of caramel apple