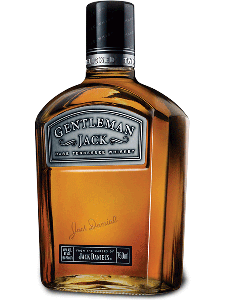 Gentleman Jack is a premium version of Jack Daniel's Tennessee whiskey produced by the Brown-Forman Corporation. It was introduced to the American market in 1988. The product's bottle describes itself as "Rare Tennessee Whiskey".

The Gentleman Jack brand variation was introduced to strengthen the company's share among consumers, who were drinking less liquor overall but had moved to more upscale brands, a development noted by many liquor manufacturers in the United States in the late 1980s and early 1990s. [1] It is twice filtered through charcoal,[2] as opposed to a single filtering for normal Jack Daniel's, this results in a smoother taste more suitable for drinking neat. [3] A celebration unveiling Gentleman Jack was held on 30 September 1988[3] when 1,000 guests were invited to the company's headquarters in Lynchburg, Tennessee. [4] They could not actually partake of the new product because Lynchburg is in a dry county.