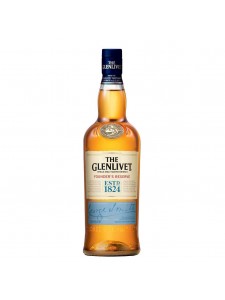 Founder's Reserve Bottling Note
First revealed towards the end of 2014, the Founder's Reserve is now available in the UK and will be replacing The Glenlivet 12 year old in many of the mature markets despite initial indications that it would sit beside it, broadening the entry-level options. Named in tribute to distillery founder George Smith, it's packaged in Georgian blue.
Nose: Some dates then what at first appears to be a touch of salinity, but is better described as a slightly sharp plum and apricot wine note. There's orange zest, toffee, hints of struck match and chocolate raisins, but before this starts to sound 'Sherried' there's also pear drops, a dusting of sweet cinnamon, honeysuckle and sweet pea.

Palate: Fruity, then sweet, more toffee, a touch of anise, then into milk chocolate Flakes, banoffee pie and apple turnovers.

Overall: Perhaps a little sweet, but it would work well with ice where the sweetness would be slightly suppressed - and before you shudder with disgust, Alan Winchester said that he liked his with a little ice sometimes too. And if it's good enough for the Master Distiller. . .